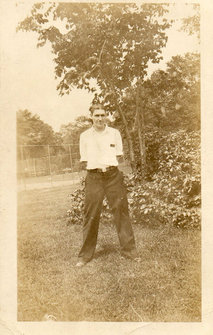 *For most of Gordon's life, he lived in Stamford, CT.  He began work at the age of 11, for Mr. Woundy, at his garage.  He began by pushing a broom and doing general "gopher" type jobs.  As he got older, Mr. Woundy taught him to be a machinist/mechanic.  This was his occupation for the rest of his life.  He had his own shop in Glenbrook for many years, and later in life, worked at his son's garage, Nicks II & IV, until he retired.

*We believe that Gordon never knew his mother, Clara Estelle Blisard.  Until I began the genealogy search for the Nichols side of the family, no one ever even knew her name.  I first found her name on his original Social Security number application, and then it was confirmed a few years ago with a certified copy of his birth information.  The assumption I am working on is that she died, as well as the two unknown siblings, when he was extremely young.  She disappears sometime after his birth, and up until 1933 when he marries, it is just his father, Arthur Ellsworth Nichols, and himself.

*He was a very private person, never talking much.  He was a fairly strict father, making sure that all of his children grew up to be responsible.  Anyone who has passed on stories of him, talks of how giving he was, what a hard worker he was, and what a good man he was.

IF YOU HAVE ANY INFORMATION CONCERNING THE NICHOLS BRANCH OF MY FAMILY, OR BELIEVE YOU MIGHT BE RELATED, PLEASE CONTACT ME.  ALL INFORMATION ON LIVING PERSONS WILL BE KEPT PRIVATE.