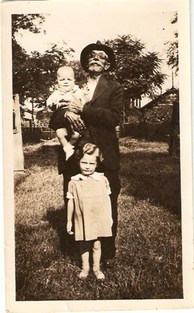 *According to the birth certificate obtained for Gordon Everett Nichols Sr., he (Gordon) was the third living child of Arthur and Clara.  There is no known information about the other two children, but as Gordon always believed he was an only child, it is believed that the other children died young.  There is no confirmation of this.

*Clara disappears after the birth of Gordon in 1913.  She died or left prior to the 1920 Federal Census, which shows Arthur (age 62) and Gordon (age 6), living on their own in Stamford, CT as borders with a Lars Larson and his family on Ridgeway Street.

*Prior to his move to Stamford sometime between 1913-1920, Arthur was a farmer in West Simsbury, Hartford County.  After his move to Stamford, he worked as a "fireman" (stoked coal boiler) at the Phillips Camphor and Wax Company.  It was at this job, around 1924, that a fire or explosion happened at the factory, blinding Arthur for the rest of his life.  His son, Gordon, at the age of 11, quit school and went to work, pushing a broom at Woundy's Garage down the road.  Gordon supported his father for the rest of his life, until he passed in 1940.

*Very little is known about Arthur's parents.  I believe I may have a line on a Nichols family that may be connected, but I won't know for sure, until I get some more records sent to me, which I am waiting on.  There is a possibility that a hunch I had a while back, may actually lead somewhere.  I was curious about whether our Nichols line could have actually come from the Westchester County area of NY, since it is so close to CT.  This has been the case with other lines in my family, that I believed were always in the Stamford area.  I will update this as I glean more information.

*Arthur is buried in Spring Grove Cemetery, Darien, CT just behind his son Gordon and his wife Jessie (Ede).  I am fairly certain based on other records I have obtained, that the birth information on his headstone is incorrect.  It says that he was born in 1962, which may be what his son and daughter in law believed.  The more records I find though, the more it is confirmed that his actual birth was in 1858.

IF YOU BELIEVE YOU MIGHT BE RELATED TO ME THROUGH THE NICHOLS LINE, PLEASE CONTACT ME.  ANY HELP YOU CAN SHARE WILL BE GREATLY APPRECIATED, AND I WILL KEEP ALL LIVING PERSONS INFORMATION PRIVATE.